**Originally posted on Around The World in 80 Books**

Today, I’m rec’ing my currents reads. I just received The Book of Harlan by Bernice L. McFadden, whom I have gushed about before here (more than once), from a Goodreads giveaway. I’ve also started reading The Brothers Sinister series by Courtney Milan. And by ‘started reading’, I mean consuming them all at a ridiculous pace, though I know I will hate it when I’m done and the series is over, but I can’t stop myself because they’re so good!

It just so happens that today’s #FridayReads are historical fiction. You know how those push all my happy buttons. So, check them out. 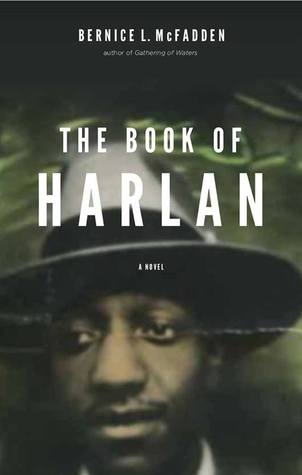 The Book of Harlan by Bernice L. McFadden – During World War II, two African American musicians are captured by the Nazis in Paris and imprisoned at the Buchenwald concentration camp.
The Book of Harlan opens with the courtship of Harlan’s parents and his 1917 birth in Macon, Georgia. After his prominent minister grandfather dies, Harlan and his parents move to Harlem, where he becomes a musician. Soon, Harlan and his best friend, trumpeter Lizard Robbins, are lured across the Atlantic Ocean to perform at a popular cabaret in the Parisian enclave of Montmartre—affectionately referred to as “The Harlem of Paris” by black American musicians.
When the City of Light falls under Nazi occupation, Harlan and Lizard are thrown into Buchenwald, the notorious concentration camp in Weimar, Germany. The experience irreparably changes the course of Harlan’s life.
Based on exhaustive research and told in McFadden’s mesmeric prose, The Book of Harlan skillfully blends the stories of McFadden’s familial ancestors with those of real and imagined characters. 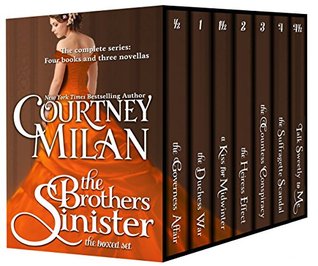 The Brothers Sinister by Courtney Milan – This is the complete boxed set of Courtney Milan’s acclaimed Brothers Sinister Series – four full length books, three novellas – together, almost half a million words.
The Governess Affair
Miss Serena Barton intends to hold the petty, selfish duke who had her sacked responsible for his crimes. But the man who handles all the duke’s dirty business has been ordered to get rid of her by fair means or foul. She’ll have to prove more than his match…

The Duchess War
The last time Minerva Lane she was the center of attention, it ended badly—so badly that she changed her name to escape her scandalous past. So when a handsome duke comes to town, the last thing she wants is his attention.
But that is precisely what she gets…

A Kiss for Midwinter
Miss Lydia Charingford does her best to forget the dark secret that nearly ruined her life, hiding it beneath her smiles. But someone else knows the truth of those dark days: the sarcastic Doctor Jonas Grantham. She wants nothing to do with him…or the butterflies that take flight in her stomach every time he looks her way…

The Heiress Effect
Miss Jane Fairfield does everything wrong in society–intentionally.
Mr. Oliver Marshall does everything right. So why is it, then, that the one woman he can’t forget is the exact opposite of what he needs?

The Countess Conspiracy
Sebastian Malheur is the most dangerous sort of rake. Violet Waterfield, the widowed Countess of Cambury, on the other hand, is entirely respectable–and she’d like to stay that way. Their association would be scandalous even if someone suspected lies. But the truth about the secrets they share will bring England to its knees…

The Suffragette Scandal
A suffragette meets a scoundrel, and as scoundrels do, he lies to her, attempts to blackmail her…and falls in love with her against his better judgment. By the time he realizes that his cynical heart is hers, it’s too late. Once the woman he loves realizes how much he’s lied to her, he’ll lose her forever.

Talk Sweetly to Me
Miss Rose Sweetly is a shy, mathematically-minded shopkeeper’s daughter who dreams of the stars. When Stephen Shaughnessy, infamous advice columnist and known rake, moves next door, she knows she should avoid him. But you know what they say about the best-laid plans of mice and astronomers… This site uses Akismet to reduce spam. Learn how your comment data is processed.

I met a friend in CVS. #Santa
Another room done. This owning a home business is expensive and exhausting. Floors are next I guess...
Finally done!! #roommakeover #beforeandafter #redo #home
Where'd you go TQ? Unintentional book cover hair. Can I also just say straight bangs 👍🏾. Curly bangs 👎🏾
At least get the flag and colors right. #Juneteenth
Switching things up a bit 💇🏾‍♀️