Disclaimer: I like to write spoilers and use parentheses. Be warned. I apologize for the crappy pictures also. I tried…

I’ve been a huge Outlander fan since my parents gave me a 1st generation Nook and it was a promotional freebie. Before I’d even finished the first book, I’d purchased the remaining books in the series and then binged on them in a week. Kudos, Random House, for the marketing strategy. Worked perfectly on me. I waited oh NOT so patiently for book 8, MOBY, to be released this year, then proceeded to devour that one as well in under 2 days. There is just something about Jamie and Claire’s story that pushes all the right buttons. The combination of history, fantasy, romance…yeah, just does it for me. Hearing last year that the first book would be adapted for TV made me unbelievably happy. It is crazy how much my social media presence has been devoted to Outlander over the past 12 months.  I even won this: 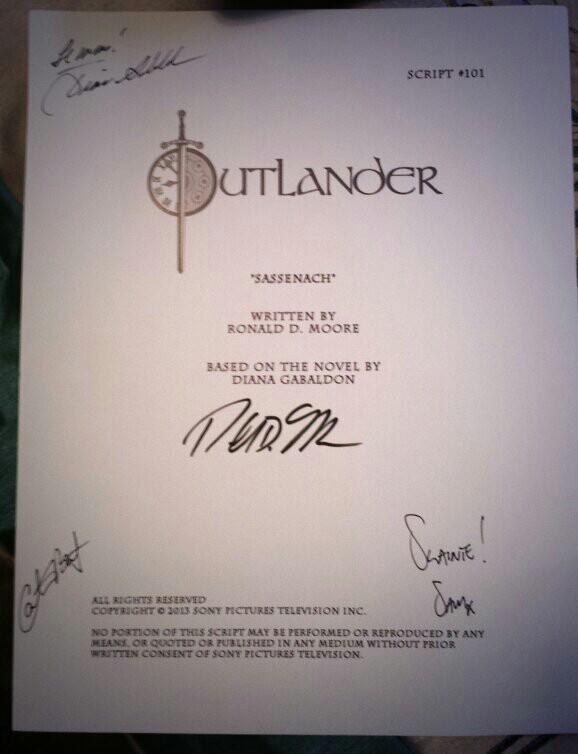 Last night, I got the chance to attend a screening here in New York City. which went a long way in assuaging my hurt feelings for not being able to attend Comic Con. 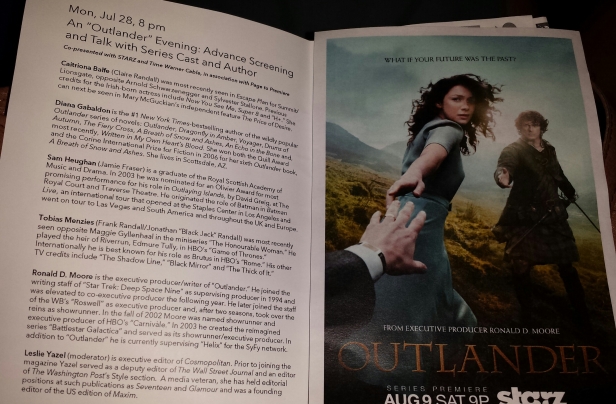 As I’m one of the few people on the planet that has never seen an episode of Battlestar Galactica, my only prior exposure to anything by showrunner Ronald D. Moore was the late 90s show Roswell, which I was a huge fan of at the time. But, different show, different source material, different audience. I’ll admit, I had reservations. Outlander fans need not worry though; our favorite books are in good hands (books, plural, cuz we know season 2, etc. will happen! Sony and Starz need to get on that STAT.).

I loved it! Loved! From the opening titles to the credits, I was not disappointed. This is not Game of Thrones for women; it’s just a damn good show. I sat in that theater at the 92nd Street Y, totally riveted. And sighing and squeeing like the fangirl I am. It was faithful to Diana Gabaldon’s book, with added scenes that only further fleshed out the characters’ back stories. I will be honest, it was maybe a little too heavy on exposition, as was the book, which is understandable when you’re establishing a story for viewers, especially those unfamiliar with the source material. I worry that the amount of set-up will turn some people off, though. As a fan of the book, I know what’s coming, but will non-readers get it? Many fans said those beginning scenes made them root for Frank. Didn’t happen for me, but you could definitely see why Claire will want to return to her own time so badly. Credit Caitriona Balfe and Tobias Menzies for totally owning their roles as Frank and Claire. That scene in the ruins of Castle Leoch – HOT! Sweet baby Jesus! Okay, maybe I can see the appeal of Frank. *wink wink*

The real turning point in the episode for me was when a certain ghost shows up. The pacing seemed to pick up and you could feel things were about to happen. Another particularly beautiful scene I loved involved the druids dancing at the stones. There is a shot from above of just their torches moving into formation that added that subtle magical, fantasy element.

We get thru the stones (I wish the car crash metaphor was a bit longer), and after a run-in with Black Jack (I’m going to love to hate Tobias Menzies) there he is – our James Alexander Malcolm Mackenzie Fraser. Just Jamie at this point. And I say Jamie, because Sam Heughan just IS Jamie. He’s not playing Jamie. He is. End of story. The first time he calls Claire Sassenach, I was a goner. Dead. Graham McTavish is fierce as Dougal. You can see him thinking and plotting. A few laughs in these scenes added some needed and well-timed levity.

I can’t forget Bear McCreary’s score (!!!!), which is as much a character as Scotland is. Gorgeous costumes as well. Everything just felt…right.

I won’t spoil anything else, but this is must watch TV. Don’t miss the free preview of “Sassenach” this weekend. I believe you can watch it on Starz Play for free, and various other platforms, all of which escape me at the moment. If you need me, that’s what I’ll be doing this weekend. Again and again. Waiting a week between episodes is going to kill me.

There was a Q&A with the cast and creators after the screening, which topped off one of the most amazing nights I’ve had since moving to New York. Modesty pouches for all! Cosmo’s Leslie Yazel moderated, and did a fantastic job asking the right questions to let the conversation develop naturally.

They are hilarious, and charming, and just perfect. That’s not hyperbole. I mean, look at them!

Even when not in character, the chemistry was palpable. And not just in the obvious way. I so want to see a bloopers reel soon. Highlight of the night – Diana’s shout out to Sam’s ass. That lady is my hero.

I had a great night. Well worth the sleep deprivation I experienced today. And now I’m anxiously awaiting the official start of the Outlander madness!

This site uses Akismet to reduce spam. Learn how your comment data is processed.

My ride or die. My bestie. My fave person in the world. Happy Mother's Day ❤💐
A few of my favorite things 😭😭😭😭❤❤❤ My coworkers are the best! #birthday 🎈🎈
Back home safely after a nice birthday weekend away. Great hotel. Less than great experience at #Aquatica 😕
Gratitude. For every text message, FB post, IG comment, Tweet... feeling very blessed this day. 💜💜💜
We in these streets #birthdayweekend
Chapter 42, here we go! #ItsMyBirthday 🎉🎉🎈🎁🎁